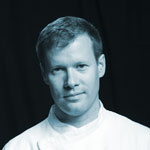 William Crutchley grew up in the coastal town of Elizabeth City, North Carolina. He began working in restaurants at the age of 15. After graduating from high school, William moved to Greensboro, NC –working for the next two years in an upscale restaurant/bistro. He moved to Atlanta, Georgia to attend culinary school at the Art Institute of Atlanta. He excelled in the AIA’s international culinary arts program. During his first year of school he worked a variety of cooking jobs to expand his culinary repertoire. In the middle of his schooling, he was asked by the Swissotel Atlanta to be their head garde manger chef. Two and a half years later, William was solicited by a French auberge to cook for a summer in their one star restaurant. He agreed. This encounter was an eye opener for William and he soaked up every learning opportunity that the experience had to offer. He worked for three months in the auberge and spent an additional month and a half in England –working as a personal chef as well as in a gastropub.

William came back to the U.S. and moved to New York to take on a position for two years at the Drake Hotel as chef de partie. Realizing his strength in banquet cooking, he went on to work as a temporary catering chef with a number of catering companies while attending Baruch College for journalism. During this period, he also consulted with a number of restaurants and businesses -improving their menus, lowering their food costs and improving the day-to-day workings of their foodservice operations. William continues to consult with businesses in the foodservice industry.

After college, William desired to work in 4 star restaurants. He was hired to work at Le Cirque as the poissoner during their busy season. Once the busy season was over, he was asked to stay on and one day become sous chef. William declined the offer and went on to work at Le Bernardin. William worked the summer and finished out the busy season at Le Bernardin. To strengthen his skills in the pastry arts, William took a job as the pastry production chef at Payard, arguably the best pastry shop in the United States.

William then became the Private Chef of Dr. Sydney Coleman. During his tenure, he prepared a large number of dinner parties and managed Coleman’s household staff. One and a half years later, William was asked by the owner of Paris Commune to assist in revamping the restaurant. He joined the team and greatly improved the workings of the restaurant. He went on to test/create recipes for “The Big Book of Southern Italian Food & Wine” cookbook with renowned food writer, Arthur Schwartz.

William is currently working with Remy/Cointreau as chef consultant/food writer for their premium cognac brand, Louis XIII and restaurant consulting.

Want to join the discussion?
Feel free to contribute!